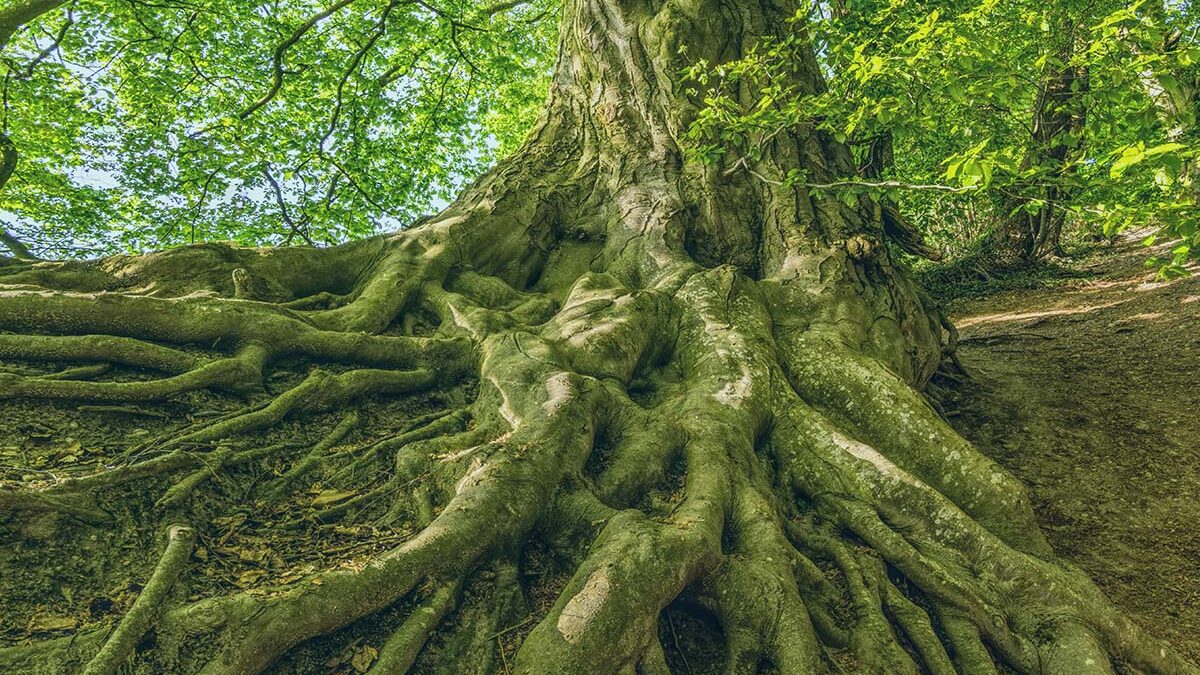 I recently came across an interesting short write-up entitled ‘Ancestral Mathematics’ which claimed that in order for you to be born today, you would have had a sum total of 4,094 ancestors over the past 400 years (image shared below). While this simplified estimation does fail to consider pedigree collapse (in which two people share the same ancestor), it is indubitably thought-provoking and opens up an important conversation: have we fully stopped to reflect on the experiences of our ancestors and — perhaps even less often considered — how many of them are we still carrying around today in the form of residual fortitude or trauma? 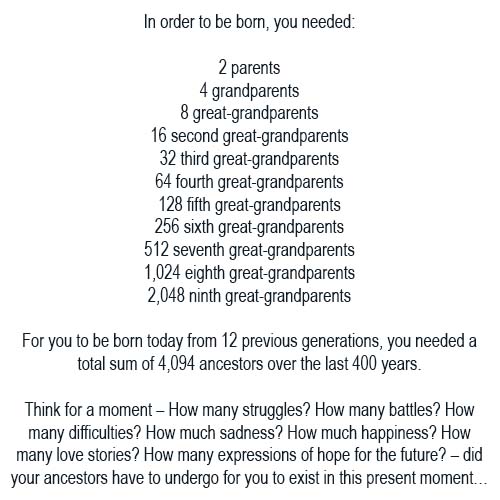 Ancestral Trauma As An Unconscious Legacy

How many patterns have been passed down for generations, and how do they affect our perceptions on life and the way in which we see those around us? How many of these long-entrenched patterns need to come up for conscious change? Before getting into the concept of epigenetics and the potential implication for us all, let us first consider the psychological element. While the depth and impact of epigenetics in relation to ancestral trauma is highly debated when it comes to present day affect, the psychological ramifications are far more understood and agreed upon. How many traumatic experiences throughout our lineages have been buried down deep into the unconscious, ‘swept under the rug’, leading subsequent family members to inherit behavioral patterns based on unrecognized and suppressed emotional responses.

Oftentimes, it may have simply been that there was no time for emotional and conscious family reflection during or after the trauma occurred. When war is raging near your village or city, those around you are starving in a famine, or you aren’t sure whether or not your close community will make it through the winter, it is easy to compassionately understand that the purest form of survival took first precedent. Unfortunately, these dire circumstances were likely quite prevalent throughout the majority of our ancestral timelines when considering humanity’s history of meta trauma. Many of us know first-hand from our close ancestors the painful stories of war or struggle that were endured either in very recent (or present) times, or perhaps one or two generations prior. Some are aware, through historical records or passed down information, of horrific events endured even further down the ancestral timeline.

But we also know that trauma does not have to stem from global cataclysmic events. As Molly S. Castelloe Ph.D. eloquently explains:

The transmission of trauma may be particular to a given family suffering a loss, such as the death of an infant, or it can be a shared response to societal trauma… Psychic legacies are often passed on through unconscious cues or affective messages that flow between adult and child. Sometimes anxiety falls from one generation to the next through stories told.

Sadly, more than enough contemporary traumas continue to affect people across the world that may create complex psychic issues for generations to come. “Being systematically exploited, enduring repeated and continual abuse, racism, and poverty are all traumatic enough to cause genetic changes… So African Americans in the United States and around the world are particularly vulnerable. And the families affected by catastrophes such as the 2004 tsunami in Asia will have traumatic reactivity for generations to come,” reports child and adolescent psychiatrist Gayani DeSilva, MD to Health in its article What Is Generational Trauma? Here’s How Experts Explain It.

But how can we begin to psychologically transmute the shadows of the past through the lens of conscious action? Considering the idea that unconsciousness uses consciousness to see itself, bringing awareness to the possibility that these ‘psychic legacies’ are impacting the way you think and engage with the world is a monumental act. You may consider writing down the ways in which your family dynamics of the past have affected your perceptions and thought patterns, thus symbolically ‘making them conscious’ through writing. We have not (yet) collectively as a society and community come together in realization of the importance of identifying ancestral trauma patterns, but many voices are reminding us to revisit and review the practices of our ancient ancestors and indigenous cultures who built many tenants of their way of life around ancestral understanding.

Our modern way of life, though advanced in many ways, severely lacks the space in which our ancient ancestors and many indigenous cultures around the world engaged in ceremonies and rituals formed around recognizing and paying respects to their ancestors. We have lost so many profound rituals of the ancients that were used to facilitate what we now understand to be profound psychological and spiritual change. In fact, renowned Romanian historian of religion Mircea Eliade was of the position that modern society had completely eviscerated this ‘sacred space’ through the permanence of a ‘profane’ non-spiritual and mundane existence that is our modern way of life.

The great work of Dr. Robert Moore, however, whose decades of research expanded upon the work of Eliade, declared that modern humanity could in fact re-engage with this ‘sacred space’ enjoyed by the indigenous peoples — and not from a standpoint of forcing religiosity. Moore identified the importance of rituals and ceremony enjoyed by our ancient ancestors and indigenous communities around the world from all ideologies and belief systems, and brought awareness to what he proposes is the innate need for human beings to experience initiation of some kind. In his illuminating book The Archetype of Initiation: Sacred Space, Ritual Process, and Personal Transformation, Moore writes:

Profane space differs from sacred space in that it has no fixed point or center from which to gain orientation. Profane space has no axis mundi, no cosmic tree or pillar leading to the heavens. This is the experience of modernity: people unable to locate a center. Profane space allows no direct contact with the power that enables renewal and regeneration to occur… Modern persons find this notion difficult to perceive because they have been so exiled from an authentically spiritual or religious understanding of human experience. Modern secularized individuals typically think that no true center really exists, and profane space becomes for them a formidable yet meaningless expanse that is fundamentally unreal. It becomes a creative void and the locus of deterioration. (Page 24)

Now is the time to reflect on the gifts our ancestors have brought us, as well as bring up for healing their struggles that have led us to inherit their trauma-based fear + anger patterns (oftentimes at no fault of their own due to extremely challenging situations).

As researcher Robert Moore, PhD discovered in decades of study throughout the world, these rituals established a space in which real transformation and connection took place (for more checkout his amazing book Archetype of Initation).

While we may not enjoy the same experiences that the Native Americans, Eleusinians, Egyptians, and many other cultures had, what we can do is bring our own personal awareness to these ancestral elements.