Home > Wellness > Why We Should Not Militarize Language In Health

Language shapes our world. In essence, we create with language. The things that we do not have a language for, do not exist. We take things from our unconscious, we articulate it as a sound, and therefore create something. Language and words are living, breathing and ever evolving things. They come into parlance once and a hundred years later they’ve taken on an entirely different meaning.

I could write something right now like BLUE HIPPO and instantly 90% of you who are reading this would picture a blue hippo. I put something into your brain with little to no compliance needed from you. I created that image, all just from using language. So language is not only about how we understand and label the world but it’s also how we actually construct it. The word “Abracadabra” the silly catch phrase of performance magicians is a contorted version of the Hebrew word; ebrah k’dabri, meaning “I will create as I speak.”

Again, we could experiment with the effect of language right here. I can prove to you that you we’re creating experiences for our bodies as well. Just thinking about a recent fight we had or a time we were wronged can make our pulse quicken and our hands shake. Imagining your body being covered by centipedes might make you itch. We experience real physiological changes, and we’ve done nothing but thought about it. Speaking it out loud is a whole other ball game! Forcing the thought into language is not only difficult but we can choose to tell the emotional story in a way where we are either self-soothed by it; “Well I was mad but I guess it was a misunderstanding,” or re-animated with rage, as in; “That f*ing idiot! Can you believe that?!”

Now, lets think about this. We know that the patient’s mindset is crucial in healing. And we know that healing is the opposite of corruption and war. So why is it that our medical language is so thwarted with military metaphors and violent expressions? Why are we talking about our bodies like they are a battlefield? How did we get there?

The History of Language Militarization

The first use of military metaphors was found in the 17th century when an English physician named Thomas Sydenham used words like “eradicating” “annihilation” “battle and destroy” when talking about his approach to the treatment of this disease. Interestingly enough, this was actually a pull away from the contemporary purview of looking at disease. At the time, the ideology that prevailed was one of balance and the theories of the Four Humors. To quickly recap, the Four Humors theories stated that human beings are made of blood, yellow bile, black bile, and phlegm and it was necessary to have a complete balance in order to maintain optimum health. Similar theories of balance between the elements can be found in Islamic Medicine, the Chinese philosophy of Wuxing, and the doshas of Ayurveda.

It wasn’t until Louis Pasteur in the 19th century and his contributions towards Germ Theory came to rise that we started to see military metaphors become part of the medical vernacular. Was it a coincidence that France was experiencing turmoil after the Second Empire of Napoleon, gearing up for the Franco-German war to come, and the zeitgeist of the moment couldn’t help but to be enthused with an “us” vs. “them” mentality?

Whatever it was, the values shifted. The revolutionary solider was elevated in these war torn times of the late 19th century and doctors begun seeing themselves as Colonel’s against these microscopic enemies called germs. The only option was to destroy these evil entities and decontaminate the otherwise perfect human body.

In the 20th century, we have indeed declared many “wars” against acute and infections diseases. The war on cancer. The war on AIDS. The war on diabetes. It seems like the entire population is in a constant battle, trying to fend off aggressive unprovoked diseases.

What happens to us when we tell our bodies about these persistance attacks? Just like a well organized army, it inflates it’s defensive and in this case; that defense is inflammation.

Inflammation has been found to be the underlying factor in diseases like crohns, rheumatoid arthritis, endometriosis, type 1 diabetes and soon to be countless others once we really grasp the concept in the medical field. I also suggest you dive into polyvagal theory for a more anthropologic and physiological explanation, but I’d like to continue to discuss how we can change the paradigm NOW, just with the use of language.

If our bodies are sick, they are trying to tell us something, and although the Four Humors theory sounds ridiculous to us now in modern times there was something that Galen, Hippocrates (and the entire eastern hemisphere) understood, that we have come to devalue, and that is balance and taking the whole body into consideration while treating it. When patients come to a doctor, chances are that they are already frustrated with their bodies and full of self loathing or a feeling of contamination. Doctor’s further insinuate this story by telling them that the tumors inside of them are “time bombs”. Our euphemisms for mental patients refer to their psyche as being broken, shell shocked, having a screw loose, etc. As if we are a mechanism of war that needs to be cleaned out, screwed in, or replaced, in order for us to resume our civic duties as quickly as possible.

How can we change our language? Lets do an experiment. Read these next few sentences and let me know how it feels in your body.

We need to nourish our bodies, heal our bodies, replenish and rebalance. Allow for the natural flow, gently remove anything that’s blocking fluidity. Our bodies’ only wish is to keep us safe and protected.

If you read that and felt a resonance, great. However, if you squirmed a little in your seat and found it to be a bit nauseating then I want you to ask yourself; how do I see my body? What language do I use when I get sick?

Is it helping me?

Let’s start from there. 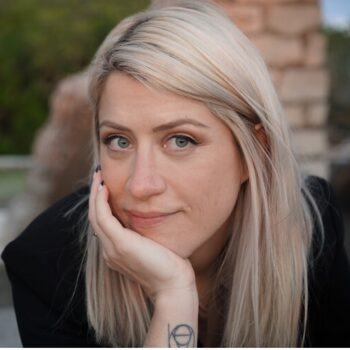 Artist, scientist, question asker. MA in Design in Health at University of Texas. Student of psychology, history, and futurism.